Black Hand Air Exchange Complex is a large industrial facility that alters climate of the Caucasus and northern parts of the Middle East in IronClaw's Just Cause X: Global eXchange series.

Covered in constant sandstorms and protected by high-energy Ion dischargers similar to Eden Spark, but drastically more powerful, this facility is kept secret from the outside world. Even the satellite images of the region are severely altered by careful inside work within the Agency, and show nothing but old, abandoned ruins. The new site, however, bears little in common with the old Soviet complex, upon carcass of which it was built. In a mere years, the AirEx grew from a dozen of sea platforms into artificial island in size of a moderate european city. As it was situated in a territory controlled by CSTO member states, the Russian government made a good work of covering up construction works. De jure, those were dedicated to rejuvination of the Kyungastan infrastructure.

In 2020, the AirEx complex is working at full capacity, and is directly responsible for Caspian sea drainage and overall desertification of the region. Utilizing a climate control technology, scavanged at Stingray and Hantu, then modernized by Black Hand's shadow masters, it is a testing ground for the upcoming Global Change program, dedicated to bring a planet-wide ecological disaster and a new extinction event with purpose of claiming monopoly rights over Earth's water resources and centralizing governments grip over their citizens. It also serves for corporations within the group to make money on infrastructional projects and construction works for a humanity clinging for survival on a changing planet.

While the AirEx bears multiple mechanisms for a climate change, it is mostly an atmospheric processor, exchanging the natural air with a nanomachine altered solution that drastically slows down a water cycle. It is powered by a nuclear reactor, and has a Bavarium supercomputer and stereolitographic manufacturing systems. Expecting unwelcomed guests from the beggining of it's operation, the AirEx was rigged with nuclear mines to be destroyed in case of capturing.

Despite that, the complex is far from being "unprotected". It houses batallions of Black Hand elite troops, equipped with the finest weaponry on Earth, dozens of top-end vehicles like Chimaera Bloc II attack choppers and URGA Buran gravity repulsion tanks, mechs and self-repairing, nanocomposite drones, as well as sophisticated, gravity-disruption AA systems. And if that's not enough, there's a platoon of Shetani supersoldiers, geneticaly engineered commandos with jet-powered wingsuits, regeneration abilities and psychic powers.

It is located on the drained area of the Caspian seafloor, north-east of the Kyungastan archipelago.

AirEx walls, as viewed from the cliffs. 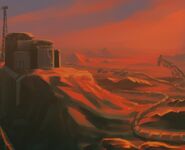 Canals inside the complex.
Add a photo to this gallery
Retrieved from "https://just-cause-fan-fiction.fandom.com/wiki/Black_Hand_Air_Exchange_Complex?oldid=7257"
Community content is available under CC-BY-SA unless otherwise noted.